The global climate has changed drastically in the course of the earth's history. Yet, there is no doubt that current global warming is men-made.

Climate change, the greenhouse effect, global warming - nowadays almost everyone has an idea of what these terms mean. Yet, often little is known about the scientific background of these concepts and phenomena. The climate of our earth has changed drastically over billions of years - heat waves followed eternal ice ages. Due to natural influences, climate changes occur continuously. But what exactly are these influences?

The greenhouse effect - origin of the earth's climate

The basis of climate history is the greenhouse effect. It is a simple physical concept: By nuclear fusion, energy is generated in the sun in the form of light with an average wavelength of 500 nm. The atmosphere is transparent to light with this wavelength. However, the radiation is absorbed by the earth's surface and partially reflected in form of electromagnetic radiation. Thereby the wavelength increases to approx. 10,000 nm. This corresponds to infrared radiation and is far beyond our visible light spectrum. The atmosphere and especially the gases it contains, such as carbon dioxide (CO₂), nitrous oxide (N₂O), methane (CH₄) and fluorinated gases (HFC, PFC, SF₆, NF₃), are less transparent for this reflection. The earth's surface thus receives atmospheric counterradiation. As the content of gases within the atmosphere increases, the Earth warms up continuously. Conversely, the planet cools down again when the content of greenhouse gases in the atmosphere decreases. Because of this phenomenon, carbon dioxide, nitrous oxide, methane and the fluorinated gases are called greenhouse gases. To simplify calculations, all values are given in CO₂ equivalents, since the fluorinated gases have an enormously higher greenhouse gas potential.

The influence of climate cycles on our global climate

Therefore every natural climate change has a geophysical origin. Our climate is divided into cold and warm periods. Cold periods occur with a certain regularity every 250 million years. The driving force behind this is a combination of three climate cycles and a low level of greenhouse gases in the atmosphere. The climate cycles are the deviation of the Earth's orbit from a perfect circle (every 100,000 years), the periodic change in the angle of inclination of the Earth's axis (currently 23.4° ± 2.3° every 41,000 years) and the orientation of the Earth's axis relative to the starry sky (every 26,000 years). Depending on which cycle we are in, a cooling or warming of our climate is favoured. We are currently in the Quaternary Ice Age, but in a warm period, the Holocene.

The origin of hot and cold periods

A climate cycle that favours cold conditions in combination with a drop in greenhouse gas content can result in an ice age. Reasons for such a drop can be enormous continental changes such as the formation of mountains or fissures. Resulting land masses chemically bind large amounts of carbon dioxide or methane, which leads to a cooling of the climate. As glaciation progresses, the white masses reflect sunlight and further intensify the cooling effect. Heatwaves usually follow due to violent magma eruptions, during which large amounts of carbon dioxide are released back into the atmosphere: The increased concentration of greenhouse gases reduces the transparency of the atmosphere and makes it less permeable to reflected sunlight. The climate warms up.

With industrialisation and the ever advancing technology from the middle of the 18th century onwards, the anthropogenic factors for global warming have increased enormously. Carbon, which is bound in the form of hard coal and lignite or petroleum, is mined, used as an industrial raw material and emitted in the form of carbon dioxide. Air pollution by soot and tropospheric ozone additionally increase the greenhouse effect. A warming of 1.1 °C has been measured since the middle of the last century. Our actions in the coming years will decisively determine the climate of the coming centuries. Find out more about what effects a temperature increase to 1.5°C, 2°C or even 3°C will have. 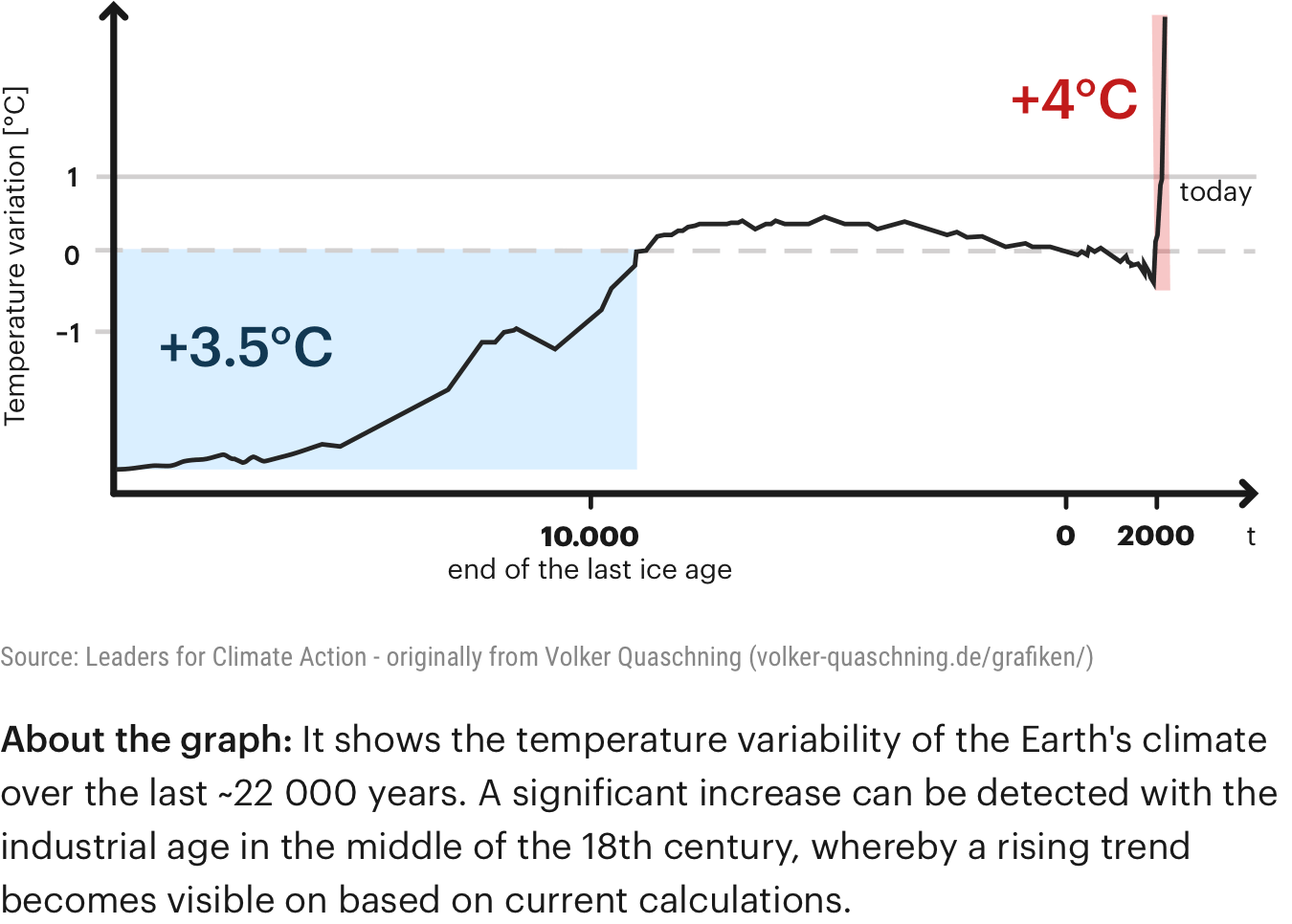