What are the consequences of climate change?

Our actions in the coming years will have a decisive influence on our climate for the upcoming decades. But what impact will these global temperature changes have?

Since industrialisation has had a global impact and bound carbon is used as a mass resource in the form of oil, gas and coal, our climate is warming up at an alarming rate. The consequences that climate change will have for us depend entirely on the mass of greenhouse gases emitted and the increase in temperature they trigger. Global changes of this kind present us with new challenges: what scenarios can we expect when our climate warms up so rapidly?

The average temperature on earth has risen by 1.1 °C over the last 80 years. The warmer climate is also warming the oceans: the surface water has heated up by an average of 0.8 °C. This results in what is probably the most well-known consequence of global warming: the melting of ice. The glaciers of the major mountain ranges are melting and the sea ice of the polar caps is disappearing at an alarming rate. 40% of ice mass has been lost at the North and South Poles in the last 30 years alone, and the Alps have lost about half their ice since industrialisation. The loss of ice mass, especially sea ice, means that less sunlight is reflected. The more ice melts, the faster the climate warms up.

A rapid rise in sea level poses a particular threat to densely populated coastal regions. About 10% of the population lives near the coast, not even ten metres above sea level. Metropolises, including New York, Tokyo and Shanghai, will become completely uninhabitable in the event of a drastic rise. Developing countries, such as Indonesia or Bangladesh, are among the most severely threatened regions. In Bangladesh, about 17% of the country's surface area is less than one metre above sea level. Financial means to ensure coastal protection and to carry out state resettlement are not available. Island states, such as the Maldives, could disappear completely. A rise in sea level of only a few metres would result in almost one billion climate refugees.

Damage of ecosystems and resulting loss of species

Our oceans bind CO₂ in the form of carbonic acid (H₂CO₃). As the gas content in the atmosphere increases, the pH value of the water decreases and the oceans become acidic. Coral reefs are considered to be particularly sensitive ecosystems, which play an enormously important role in coastal protection, as well as being home to countless animal species. Corals, mussels and all living creatures that form a calcareous shell of calcium carbonate (CaCO₃) die due to acidification and anoxia (lack of oxygen). They are therefore missing in the food chain of other animals and as pollutant filters of the oceans. Since 2016 more than half of the Great Barrier Reef, the largest reef in the world, has died. The biodiversity of these ecosystems is drastically reduced. 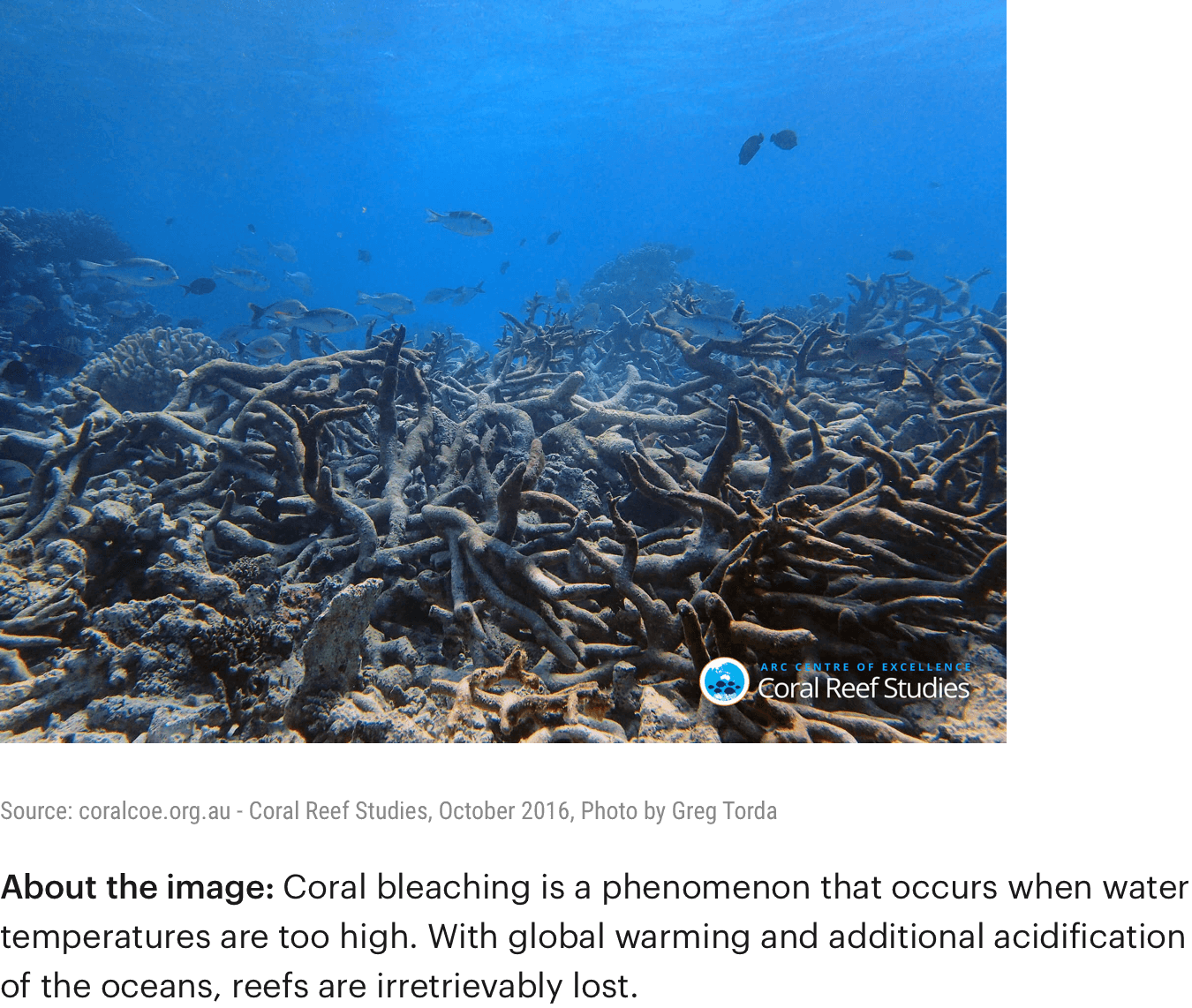 In addition to coral reefs, many other ecosystems are threatened by the constant rise in temperature. The tropical rainforests in Costa Rica, for example, are threatened with extinction due to constant drought. The arctic and alpine regions are also particularly affected. Due to the lack of sea ice, the polar bear loses its hunting grounds and starves to death. In 2004, a study by Chris D. Thomas in Nature showed an estimated species loss rate of 9-52%, depending on the emission rate. The average forecast is 24%. Such a loss can be described as the mass extinction of the Earth's history. The ecosystems of our earth have not been able to cope with such rapid climate changes. Anthropogenic climate changes occur much faster than the natural adaptation of flora and fauna to their environment.

The most noticeable effects will be weather extremes: with a temperature increase of 1°C, air can absorb up to 7% more water. The location of the dry regions will shift due to the higher water content of the air. Precipitation patterns will change, both drought and precipitation will increase. Dry regions will become even drier and wetlands will have to cope with flooding. Extreme phenomena such as hurricanes, heat waves and forest fires will become more and more normal. 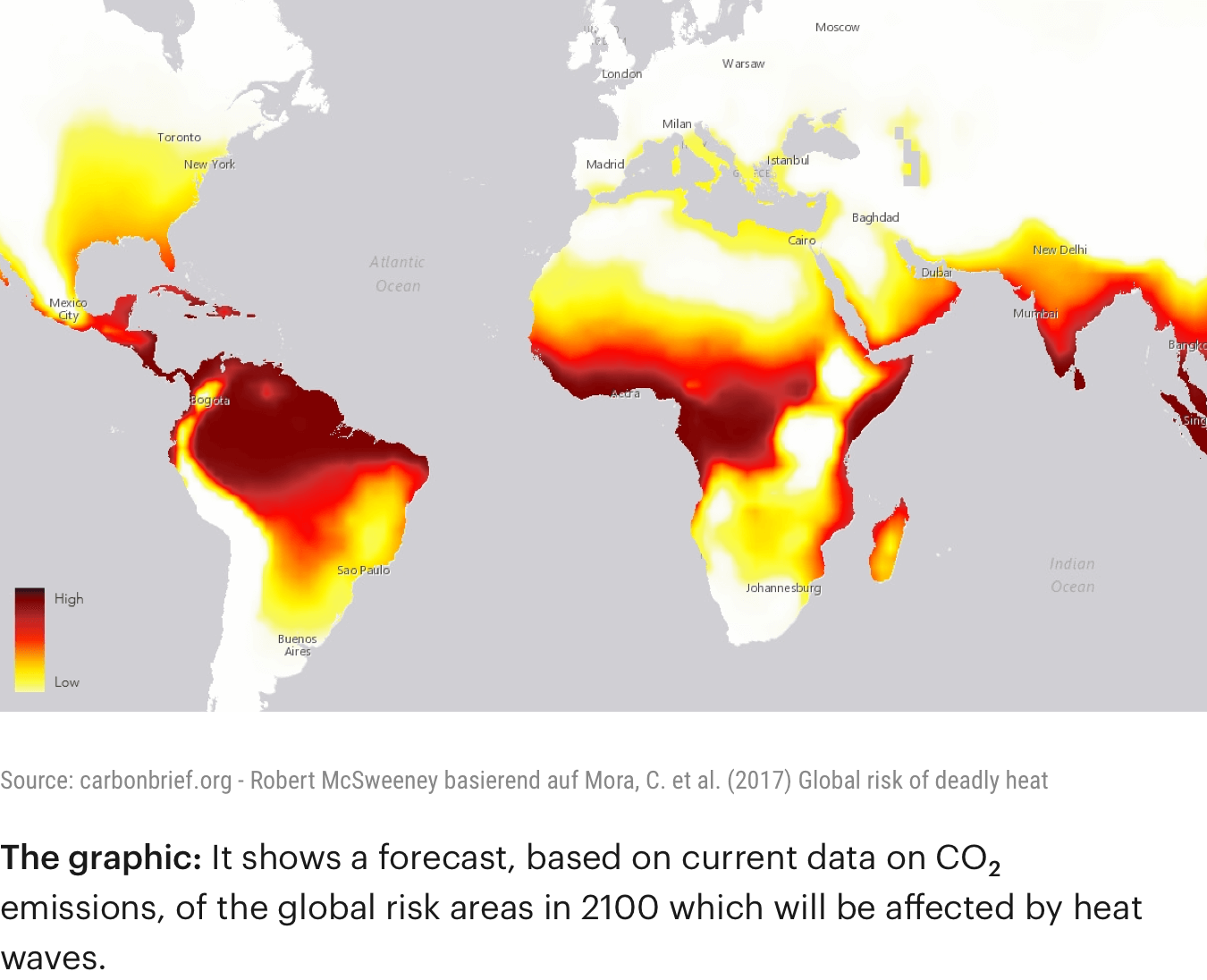 Impact on human being and the economy

Extreme droughts and the melting of glacial ice will greatly reduce drinking water sources, which would lead to drastic water shortages. With global population growth, international conflicts over drinking water and streams of refugees from arid or flooded areas, we are facing unprecedented problems whose effects on the economy and society we cannot foresee. But it is for sure that our economic growth will suffer greatly from the consequences of climate change. The more greenhouse gases we emit, the more extreme these effects will be on us humans and on the delicate balance of nature. Our greenhouse gas budget of the atmosphere is constantly decreasing and in order to limit a temperature increase to a few degrees, the course must be changed.